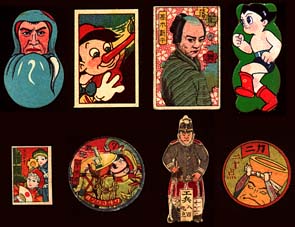 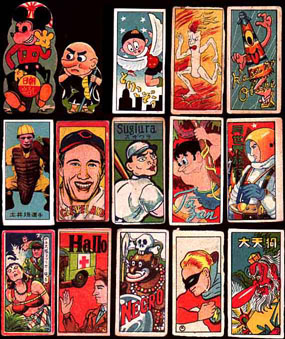 From Youthful Battles to Diamond Glory

For the uninitiated, the word "menko" generally refers to a thick piece of cardboard with a picture printed on its face. They are used as toys by Japanese children in much the same way as American children might flip baseball cards. As is the case with many traditional things in Japan, they have in recent years been supplanted by more "modern" playthings (such as transforming robots, video games and the like.) .. The Editor


Many regard the MENKO as the forerunner to modern Japanese trading cards. They are right to a certain extent but to the Japanese who grew up playing with them, they are much more than this. It is ironic that menkos are still being produced in today's Japan to compete with baseball and other trading cards. Perhaps some believe that menkos are the last soldiers of a way of life that once was glorious to ambitious little boys. It is their hope that the boys of today can somehow rediscover the burning passion for menkos that boys once felt.

An enlightening and profusely-illustrated Japanese language book, Menko Graffiti, has just been released by Korinsha Press on this subject. Japanese Baseball Card Quarterly highly recommends that serious card collectors acquire this scholarly work by author Harufumi Takaie. It can be enjoyed by anyone for its wonderful panorama of menkos and the scholar will find it immensely valuable for its reference information. In this article, we will try to relate some of the concepts of "menko" cited in this work to the development of baseball cards in Japan and to give a brief interpretation of their history.

First of all, a menko is more than just a piece of cardboard. It is a "spiritual toy" peculiar to Japan. In a way, it is the embodiment of the spirit of Old Japan. More precisely, it is a boy's social "gambling piece", somewhat like the board pieces in our Risk or Monopoly games. It serves as a medium or excuse by which a boy can meet and make friends with other boys. It allows him to challenge others and to do battle in a friendly way, in preparation for his later adult battles against unfriendly elements. In a way, it is a ticket to high adventure as a hero among boys, and a training incentive for a future role as a "Yamato warrior", a hero among men. The boys who undergo the menko experience learn to treasure forever the memories of bragging and boisterous comradeship, of daring and dramatic competition, and of endless conquests of colorful pictures of childhood heroes.

There are many ways to play with menkos, and most of the games seem to aim at either flipping the opponent's cards or knocking cards out of a ring, as in sumo wrestling. Indeed, the menkos of old are really just like sumo contenders, with many carrying the scars of battle. Because of this, people in many parts of Japan refer to menko as "bettan" or "patchin", which are sounds they hear when a boy's menko successfully defeats a challenger's champion.

The history of the menko spans 250 years, beginning in the middle of the Edo Period (the early 1700's) when menkos were made of dried mud or clay. The word "menko" literally means small object with a face, and quite a few of the early menkos carried the face of a person or animal. Through the years, the medium for making menkos changed. New materials were used including tile, wood, lead (and other metals), and finally paper.

The making of paper or cardboard menkos began around the Japan-Manchuria wars of the mid 1890's. These cards were block printed, blank-backed, and round. Some were hand tinted. As might be expected, due to Japan's preoccupation with military manifest destiny in Asia, most of these menkos portrayed faces of samurai warriors, famous politicians, or soldiers. 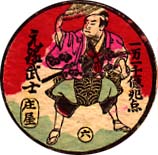 In 1900, Japan banned the use of lead in menkos, due to poisoning cases that had occurred in Osaka from kids licking their menkos (possibly to gain an advantage over their opponents in menko shooting matches). In any case, with the elimination of its lead-based competitor, the cardboard menko had free reign to live long and prosper in the big hearts of little boys, at least for the next 60 or so years.

In the 1920's and 30's, Japan embarked on an era of "cultural renaissance" in which the country whole-heartedly adopted new Western ways of all types in an effort to stand tall as a "modern" nation. All sorts of new motifs began appearing on menkos, such as religious subjects, Western comic characters, exotic animals, Silent-era Japanese theatrical stars, and figures playing sports such as baseball and soccer.

Caught up in the quest of the "new", menkos took on new shapes. Some were made into long rectangular strips so that kids could take them to school in their books as "book marks". Others were diecut into the shapes of people, animals, and later, planes which could be flung or shot through the air, such as with a rubber band.

Interest in baseball was stimulated by the visit of the 1934 U.S. All Stars including Babe Ruth, Lou Gehrig, Jimmy Foxx, and Charlie Gehringer (all of whom Eiji Sawamura struck out consecutively!). Unnamed baseball players began to appear on menkos. These simple, generic cards would later be replaced by menkos which named popular colleges or high schools and much later by those depicting professional stars.

Baseball got another shot in the arm when Japan lost World War II and General MacArthur's occupation prohibited the glorification of traditional Japanese heroes. This meant that the Japanese soldiers and samurai warriors who had once graced the faces of menkos had to be replaced. Japanese baseball stars and Sumo wrestlers were a natural, being an acceptable alternative as Japanese "hero figures". Looking for ways to forget war and its depressing aftermath , the Japanese began to visit movie houses more frequently to see American cowboy flicks, Mickey Mouse and Popeye cartoons, and Tarzan adventures. Of course, these cultural "heroes" also starred on menkos.

A third booster shot to interest in baseball occurred with the popularization of TV in the late 1950's, and the broadcasting of games, especially those of the Tokyo Giants and the Hanshin Tigers. Also benefitting from this new recreation device were programs dealing with outer space and monsters, as well as Japanese TV programs which also found their way onto the fronts of menkos.

The post war education system in Japan, which stressed anti-war sentiments, as well as the national attempt to replace military power with economic power, eventually molded a new generation of boys who no longer felt a need to battle in play to prepare for eventual military duty. Accordingly, the role of the menko began to take on lessening value. This was particularly true during the years of economic and political hardship beginning in the mid 60's. As Japan became more technologically advanced and television secured children's play-time attention, mothers pressured their kids to devote all their time to study in order to get ahead in life. Children forgot about their menkos.

Up until this time, menkos had been produced using relatively crude printing since they were made for boys to "fight" with and destroy. Now that menkos were no longer being used as "fighting pieces", the printing was refined so that the cards would be attractive and collectable. At the retail level, merchants began to repackage unsold menkos and emphasize them by using them as prizes or in grab-bags.

In the 1970's, concurrent with Japan's desire to modernize and replace the traditional with the new, several new products were introduced to compete with the menko. The minicard format (about 2 x 2 1/2 inches) appeared around 1972 and achieved spectacular sales especially when the subject was an extremely popular animation or live-action TV Hero. Stickers and seals were also introduced. In the wake of the popularity of the minicard, numerous attempts were made to revitalize the menko industry and capture the lost last generation of kids by making menkos even bigger, by putting them into attractive packaging, or by making them thicker. But, cards in themselves as toys were generally no longer enough to capture the heart and mind of the modern Japanese child. (This was also true of baseball related cards. Only the Calbee Corporation, by packaging cards with its potato chips, can boast a long-running business in baseball cards.) When the Takara company (which produces the highly successful Takara Baseball Game Sets) marketed a series of baseball menko team sets in 1984, it decided not to renew production the following year because of poor sales.

In the final analysis, the fate of the menko rests with the children of the future and their ability to appreciate the values and spirit which playing with menkos was able to instill in their fathers, grandfathers and great-grandfathers. It is interesting to note that the great Sadaharu Oh, who swung his bat with the spirit of a Zen sword, fought his first battles on the field of the menko match. While he always competed fiercely and put both heart and soul into his game, he has always commanded the respect, admiration and support of those he played both baseball and menko with.....and beat.