Based out of Austin, Texas, Stevie Ray Vaughan was a proponent of the Texas blues sound, a swing-driven blend of blues and rock. Eschewing music lessons, he preferred studying and playing by ear alone. His virtuoso playing, influenced by The Rolling Stones and Albert King as well as Eric Clapton and Jimi Hendrix, attracted the attention of peers such as David Bowie, who asked him to play on his 1983 album Let's Dance. Vaughan's first record with his group Double Trouble, Texas Flood, was released that year and was certified gold, netting him two Grammy nominations and rave reviews from Guitar Magazine. 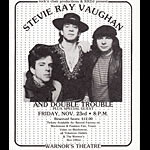