Former lead guitarist with Dire Straits, Mark Knopfler went on to pursue a noteworthy solo career, releasing several albums and soundtracks under his own name. A highly respected guitarist who uses a fingerstyle picking method, he has featured on numerous records by Eric Clapton, Bob Dylan, Van Morrison, and many others. He scored several movies, among them Local Hero and The Princess Bride, and produced albums by Dylan, Tina Turner, and Randy Newman. 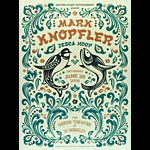