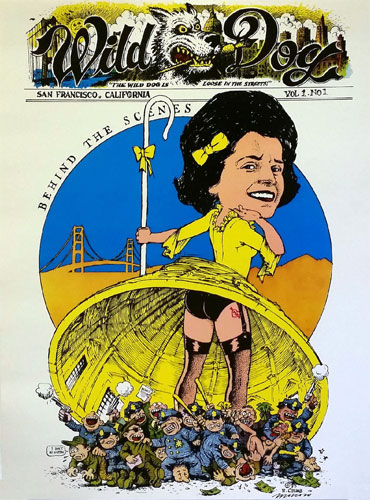 $200.00
Wild Dog - Feinstein Behind The Scenes
1985 promotional poster for Dan O'Neill's Wild Dog newspaper
The Wild Dogs were a group of cartoon artists put together by Odd Bodkins artist Dan O'Neill to cover the 1984 Democratic convention in San Francisco. This poster was made in 1985 when Diane Feinstein was mayor of San Francisco. It was commissioned by the Mitchell Brothers who owned the O'Farrell Theatre, a famous adult entertainment venue in San Francisco's Tenderloin district and a favorite hangout of O'Neill's gang. The theater was subjected to raids by Feinstein numerous times and the owners countered by printing this poster and putting it up in City Hall as well as on lamposts in the vicinity of the Mayor's home in Pacific Heights.