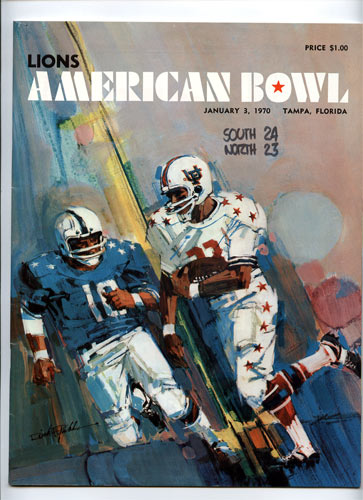 $60.00
As 1969 turned into 1970, the city of Tampa prepared to host the second annual Lions Club All-American Bowl at Tampa Stadium. Just hours into the new decade, however, an unanticipated controversy threatened to overshadow the event.
Organizers of the game, as well as coaches, players, and fans, were stunned to find out that four of the five African-American players representing the South team had quit and decide to leave town. Without even checking out of their hotel or informing the bowl organizers, the players took their belongings from their rooms at the Sheraton Motor Inn.
The players, Ron Shaklin and Glenn Holloway of North Texas State, Arthur James of East Texas State, and Ron Gardin of Arizona, had been involved in a dispute at the Sheraton on New Year's Eve. According to hotel manager Louis Hautzig, the players tried entering private parties in the hotel and were asked to leave the ballrooms by security. Shanklin, for his part, offered a different account of the events.
Clearly, the racial undertones were impossible to ignore. The players felt discriminated against and chose to deal with it by leaving town. What in actuality may have been a failed attempt at party-crashing and a random case of bad service, to those players seemed like something much more sinister.
The North squad came in armed with talent from some of the best schools in the country. Starting at quarterback would be Dennis Shaw of San Diego State, who led the nation in total offense in 1969. Winners the previous year, the North was installed as a 13-point favorite over the South. Few could have anticipated how the game eventually played out.
In front of 17,642 fans on a cold and gloomy day, the South rose to the level of the heavily-favored North. That is, at least, after a rock first half in which the North raced out to a two-touchdown lead. After spotting the South an early three points, the North rallied behind a 52-yard touchdown pass from Shaw to Jerry Hendren, a 2-yard touchdown run by Bob Anderson, and a field goal by Jim O' Brien to take a 17-3 lead into the half.
Florida State quarterback Bill Cappleman led the comeback for the South by connecting with Dennis Hughes of Georgia on a 27-yard touchdown in the third quarter to cut the lead to 17-9.
Larry Stegent of Texas A&M, who'd rush for 114 yards on the day and earn the game's M.V.P. honors, scored from five yards out with just over nine minutes left in the game. A successful two-point conversion toss by Cappleman notched the game 17-17.
It didn't take long for the North to get back on top, as Shaw connected with Hendren again, this time on a 72-yarder to give his team a six-point lead. He bobbled the snap on the extra point attempt, however, and his pass attempt into the end zone fell incomplete, leaving his team ahead by a count of 23-17. Cappleman answered right back just three minutes later for the South, hitting Eddie Ray of LSU on a 48-yard touchdown pass with 4:24 left in the game.
Still, the North had a chance to take the lead on a field goal attempt by Jim O' Brien of the University of Cincinnati, but his kick went wide and the South held on for an improbable 24-23 victory