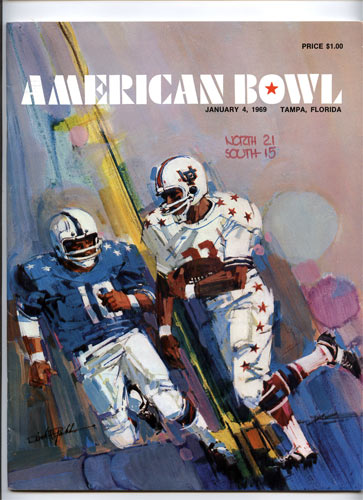 $75.00
The first major event of 1969 to be held at Tampa Stadium would be the first annual American Bowl, played on Jan 4th. The game, sponsored by the West Coast Lions Club, would feature all-star college football players from programs around the country.
The game, originally known as the All-America Bowl, showcased a who's who list of college standouts who would go on to future glory in the NFL. The North squad featured Notre Dame linebacker Bob Kuechenberg, Kansas quarterback Bobby Douglass, and Penn State tight end Ted Kwalik, while the South team touted University of Florida running back and Tampa-product Larry Smith, University of Miami defensive end Ted Hendricks and running back Eugene Mercury Morris from West Texas State.
The coaching staffs of both teams were no slouches, either. Legendary Alabama Crimson Tide head coach Paul Bear Bryant led the South squad, where he was joined by Ray Graves of the University of Florida, Fran Curci of the University of Tampa and College Football Hall of Famer Frank Broyles from the University of Arkansas.
The North was led by Purdue coach Jack Mollenkopf. His staff included coaches Pepper Rodgers of Kansas and Navy's Lee Corso. The Lions American Bowl games continued until 1977.
Only 16,280 attended the soggy first showing of the American Bowl, and the event lost $40,000 in revenue. Despite the bowl's disappointing debut, where the South lost to the North, 21-15, planners continued to schedule the event for the next year.